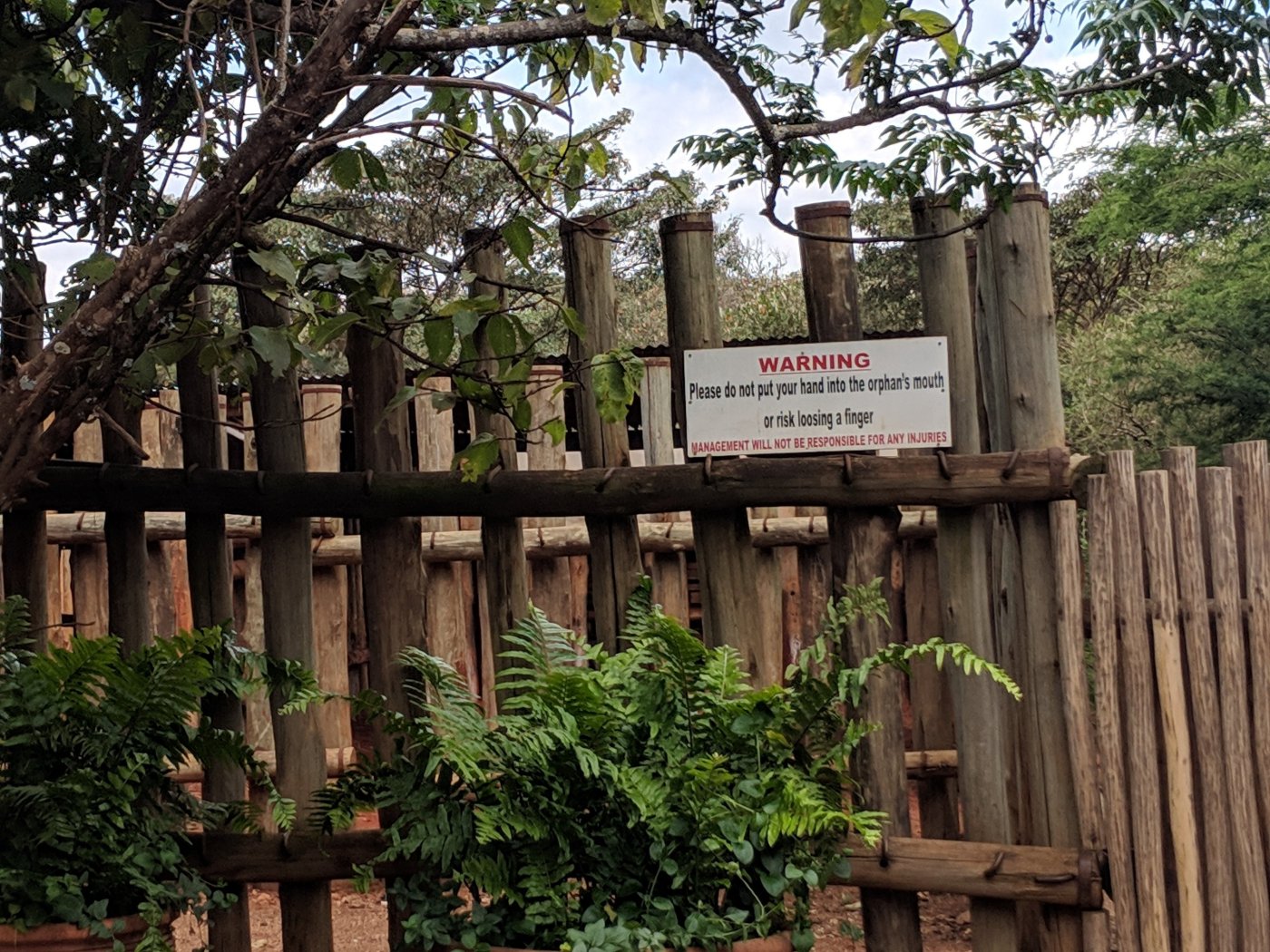 After a sound night’s sleep we had breakfast at the hotel, outside overlooking the pool area. They served the usual continental style with self service bacon, sausage etc. We also had a freshly made omelette.

At 10am, we met our driver, James in a large Toyota Landcruiser with just us as the passengers. James is going to be with us for the next few days. The plan today was to first visit the elephant orphanage and then the giraffe sanctuary.

It took us about 35 minutes to get up the Sheldrick elephant orphanage. On the way James pointed out some of the main things in Nairobi, including the independence park. We also spotted a family of wart hogs on the side of the road. 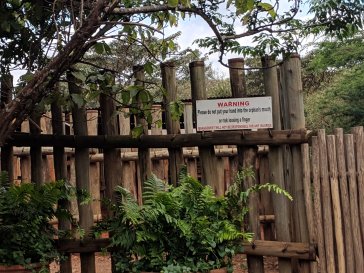 The orphanage is open for an hour a day between 11 and 12 for public viewing and was pretty busy! While we were queuing to get in, we had a very close encounter with another wart hog which choose our point to trot through the queue!

On entry to the site, we walked through the shop and down to an area roped off with ow ropes. We took up position on a step and after a short wait we could see some small elephants coming down the hill towards the roped off area. They came in about 2 or 3 at a time and the keepers fed them, what we learned was, human formula milk. Some f the elephants were pretty cheeky and kept trying to go back to the wheelbarrow with the milk bottles in when the keepers were not watching. Eventually there were 9 elephants in there, some of which got very close to the people stood by the ropes. 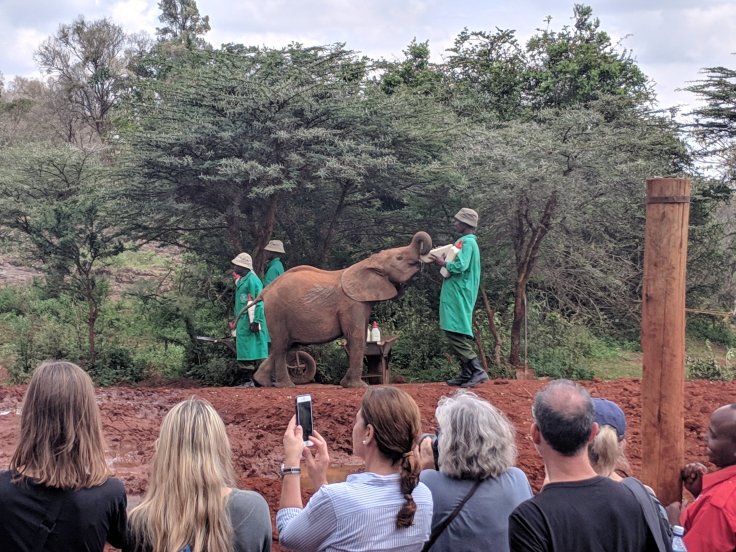 One of the keepers then gave a talk about the elephants and the orphanage. All of the elephants have been found, some because their mothers have been killed by poaching and some because their mothers have died. There are 22 elephants in the orphanage and they stay there until they are about 3 years old. At that point they are taken to a separate area in one of the national parks where the process to rehabilitate them into the wild begins. This can take up to 5 years!

After watching the 9 elephants playing together and wallowing in the mud and dust, they were led away for 10 older elephants to come to be fed. We changed places and managed to stand by the rope and actually got close enough to touch one of the elephants. As expected, the skin was rough, but I hadn’t realised that they would also be hairy, with coarse black hairs! 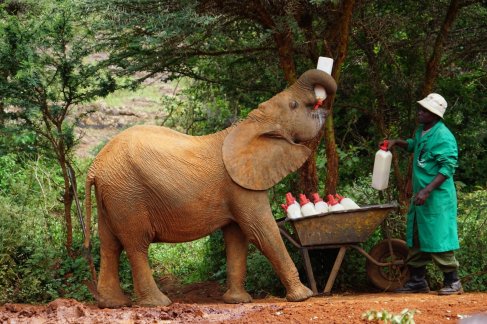 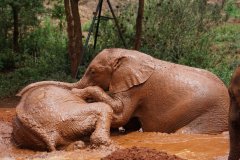 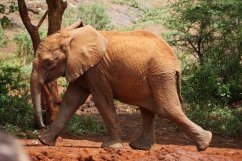 At the end of the hour we met our driver back in the car park for a short journey to the Karen Blixen giraffe sanctuary. Once parked, we walked into the sanctuary and had to wash our hands before we were given some pellets to feed to the giraffes.

The giraffes at the sanctuary are the most endangered ones, the Rothschild giraffe. We were able to feed the giraffes and their long tongues were far softer and less slimy than I had thought. 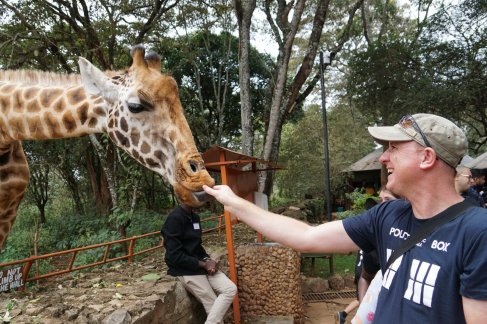 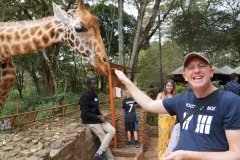 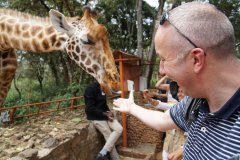 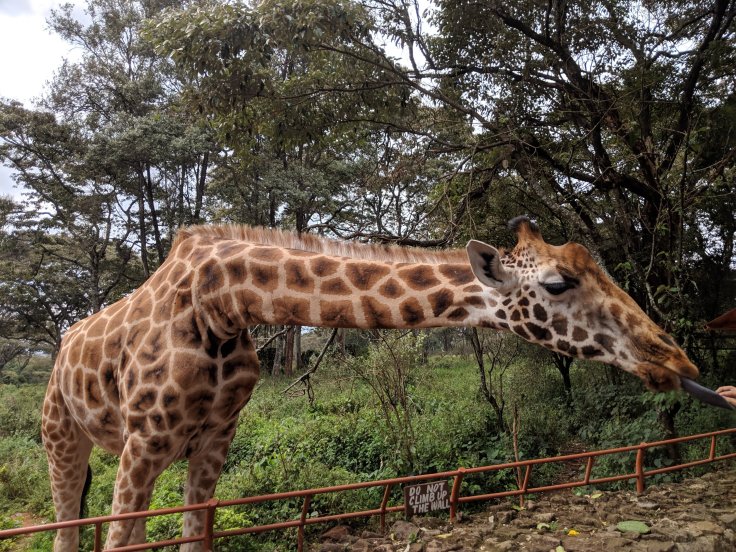 There was also a raised area where you ended up at head height of the giraffes.

We had a coffee before heading back to the car where we saw these warthogs!

The drive back to the hotel was much slower with very heavy traffic. On the way we saw a family of baboons and some storks perching on the sports stadium.

We eventually arrived back at the hotel and after a quick stop in the room, we headed off to walk about 25 minutes to the Nairobi museum. After negotiating crossing a 8 lane road, we arrived at the museum. By now it was 3pm and so we had some food at the cafe, following which we wandered around the museum grounds before walking back.

We spent some time reviewing our photos with a beer sat around the pool.

After a shower and a short break we went back downstairs to the restaurant and played cards before some food! An early start beckons so we headed to bed!