Before today’s offering, I’m asking the picture below which Google ‘kindly’ sent me comparing then and now. I think that the then picture is from India, about 9 years ago!

We walked down the road to a breakfast cafe and ordered omelette with cheese and ham. The omelette itself was lovely but they served it covered with a tomato sauce and with refried beans and guacamole on the side which didn’t add anything to the dish! However, for only 70pesos (£3) including coffee and juice, the price was reasonable.

Back at the hotel we met up with our group for our tour. We left at 9am and met our guide, Juan and driver, Marcus.

Our first stop off the day was a village called El Tole. The village was very pretty with a blue and white building that used to be a church. The main attraction however is what is supposedly the oldest tree in the world. 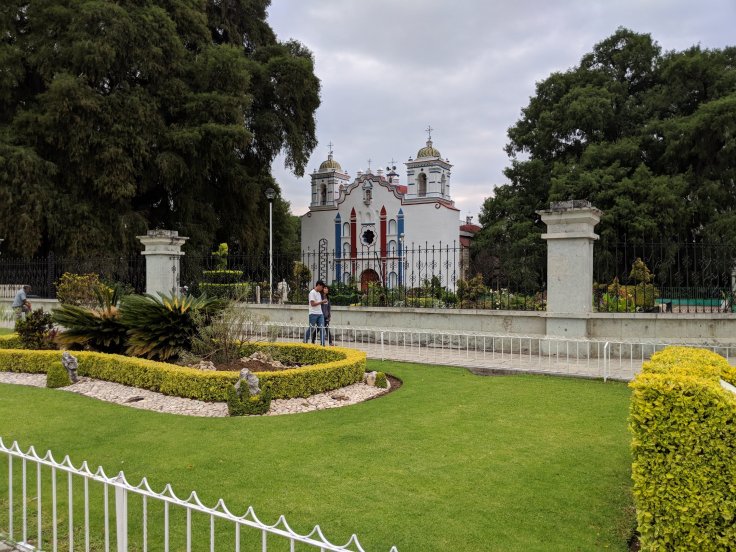 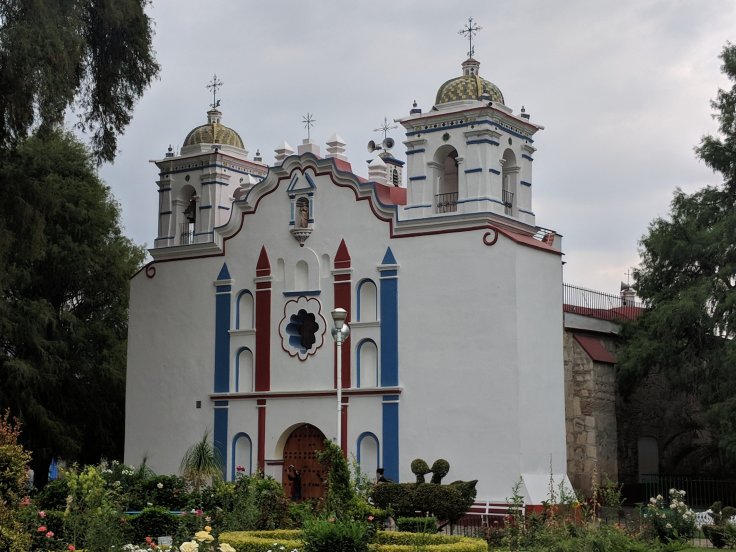 Our guide told us that it is at least 2,000 years old, 50m high and about 56m around the trunk. On entering the garden with the tree in, we were introduced to a small child who took us around the tree and pointed out various shapes on the trunk of the tree with a laser pen, for example, a sleeping elephant, a stag’s head and Jennifer Lopez’s bum! 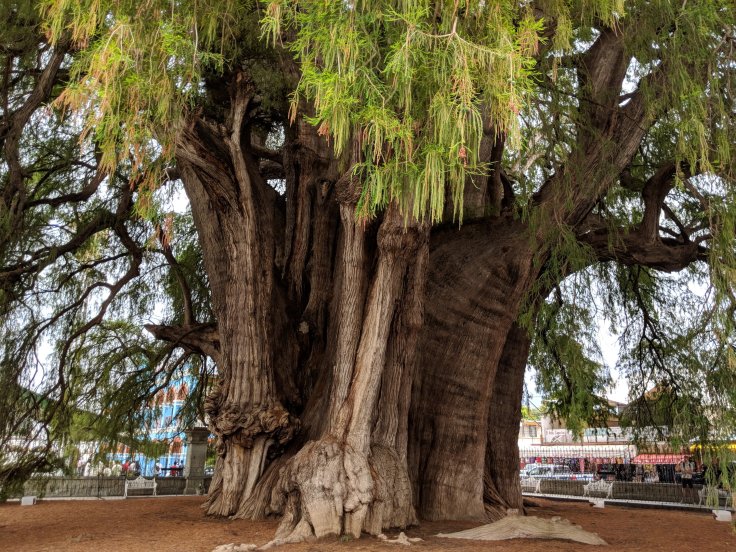 We drove for another hour or so along a new highway before turning off onto some rougher roads to visit Hierve el Agua. Here there was a small village and the plan was to go on a 45 minute walk to see some petrified waterfalls, made as the water flows over the rock and leaves a limestone deposit. After that the are a couple of natural pools where we were to go for a swim. However, 10 minutes into the walk the heavens opened and so we retreated to a covered patio area near the pools, but not before we’d all got pretty wet! 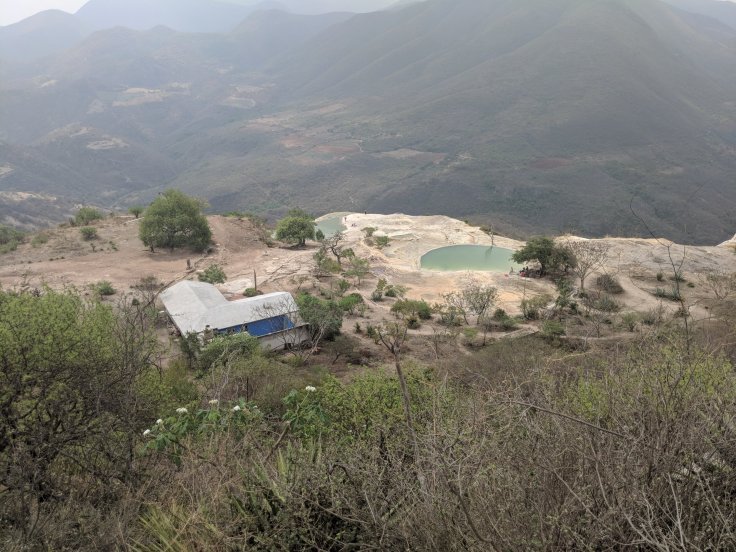 The rain didn’t last long and once it stopped we changed and headed for the pools. The setting is pretty spectacular and the pools have the effect of an infinity swimming pool. Needless to say Ed didn’t swim so he spent time taking photos. 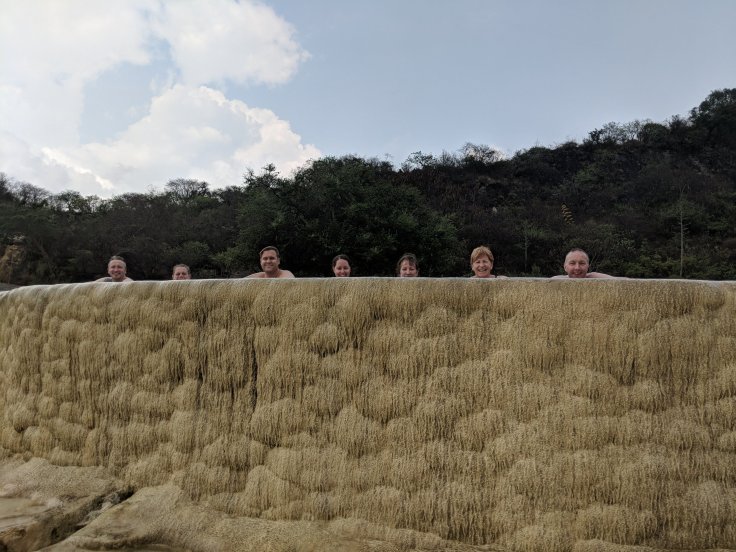 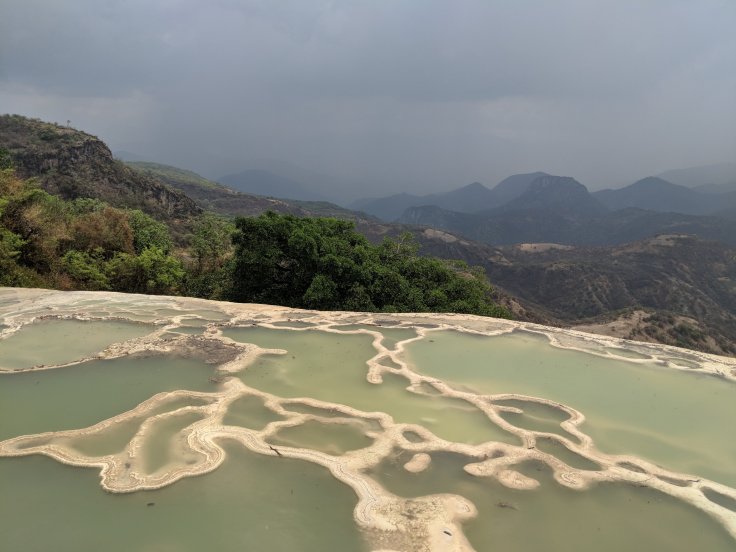 The sun came out and it got pretty warm. Once we’d changed again, we started back on the hike to see the waterfalls. The trail took us a long way down some steep (and tall) steps and we were able to see the petrified waterfalls from just about every angle. Meanwhile thunder was reverberating around the valley. Despite this, we managed to get back up to the top before the rain came! 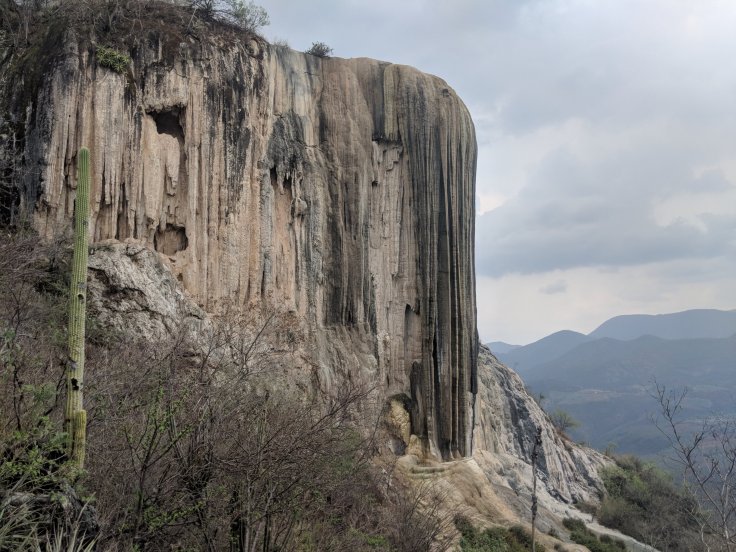 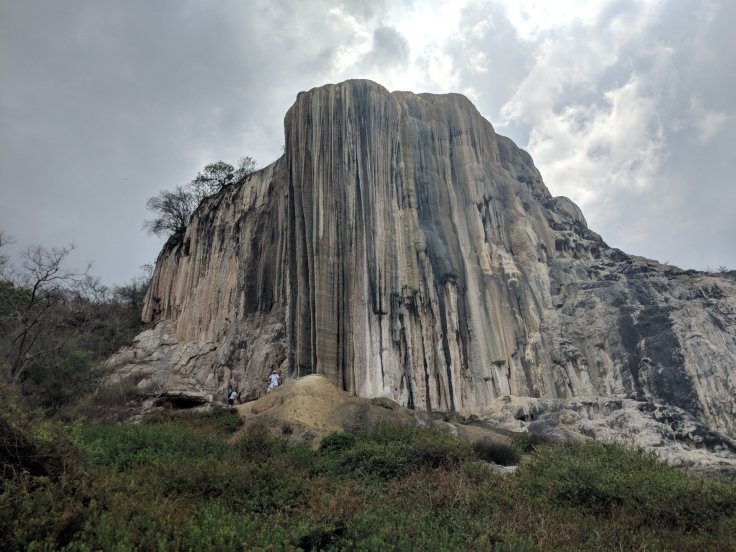 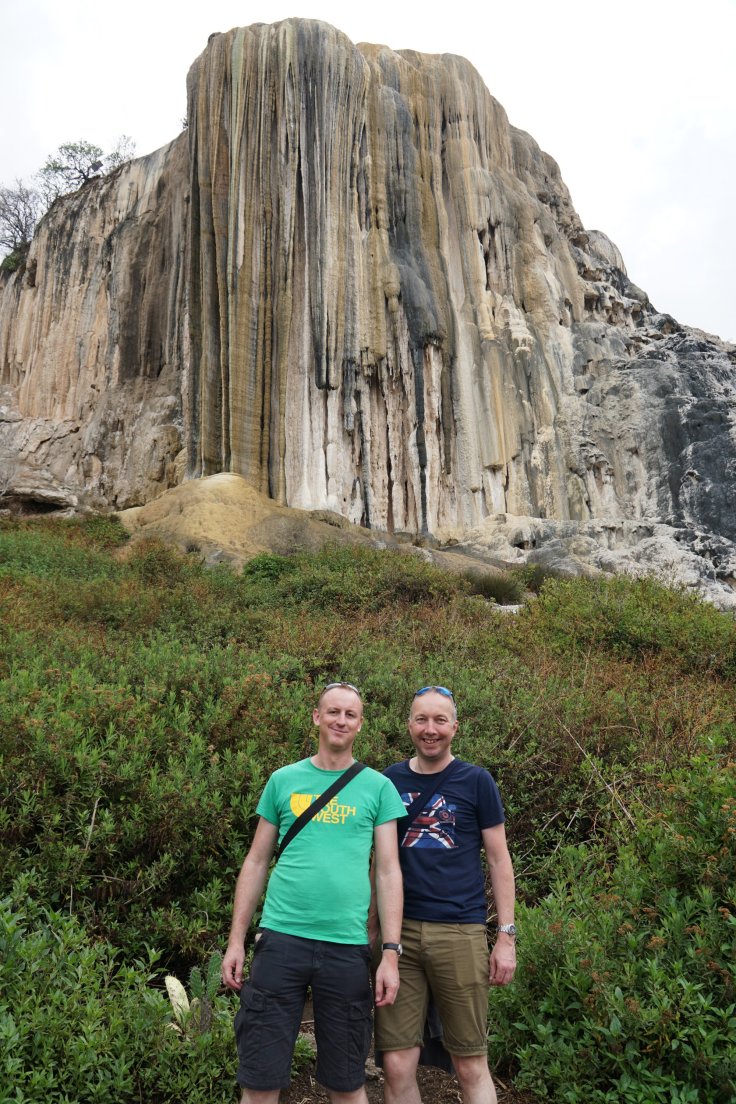 Next stop was for lunch. We were taken to a touristy place where there was a buffet. Just before we left there was another huge thunderstorm. This delayed us going to our next stop which was ancient ruins at a place called Mitla (the place of the dead). The ruins date from the 7th century and include some intricate carvings. The main structure is made without any cement and had survived many earthquakes due to the way that is constructed. 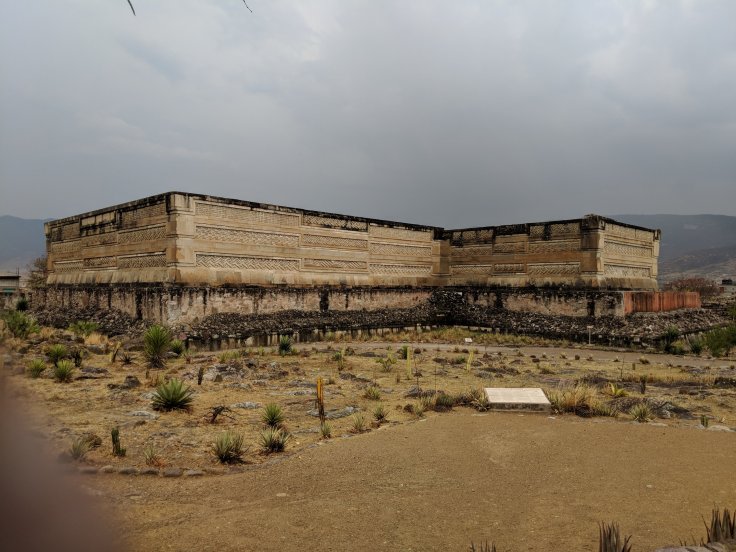 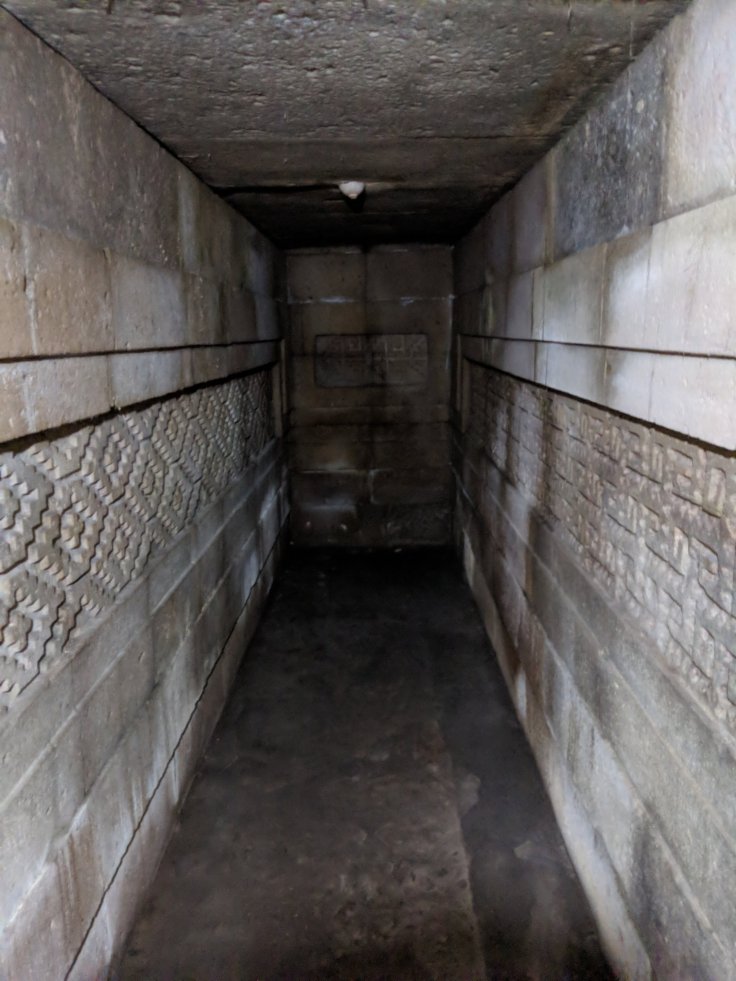 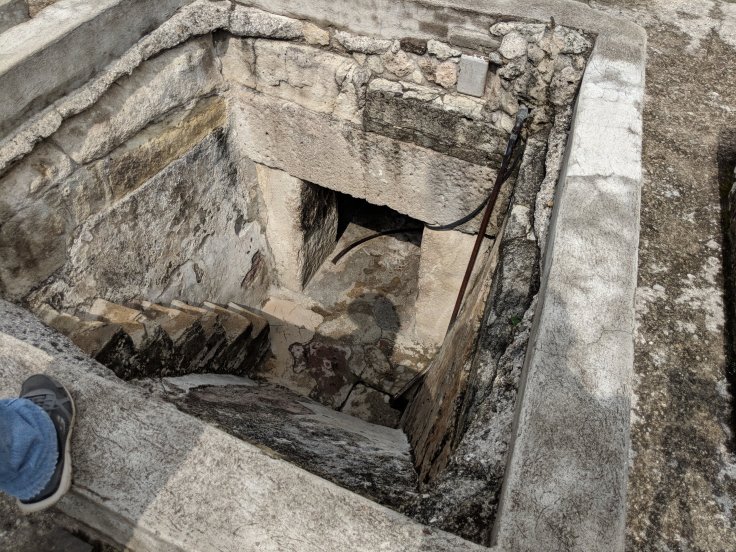 Next we went to a looming workshop, run by a Zatopec family, where we learnt how they make the wool and how it is dyed from natural materials. Then there was the obligatory showroom and one of our group bought two rugs! Like most of these workshops, the rugs were intricate and clearly well made, but not our taste! 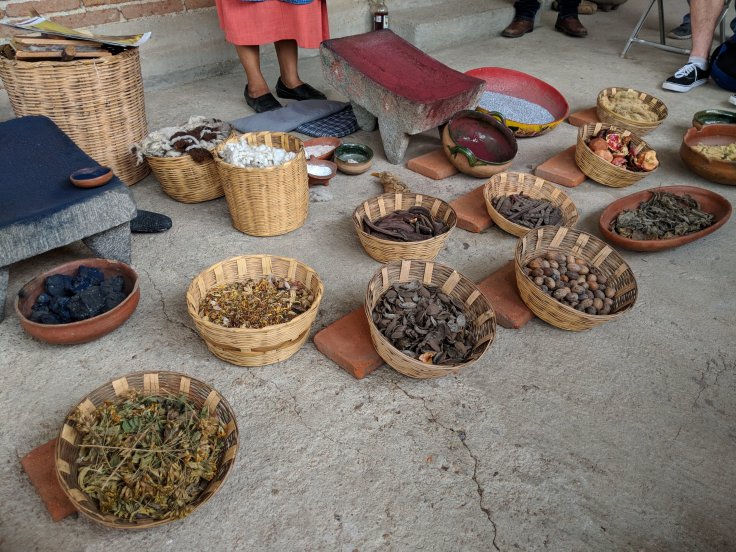 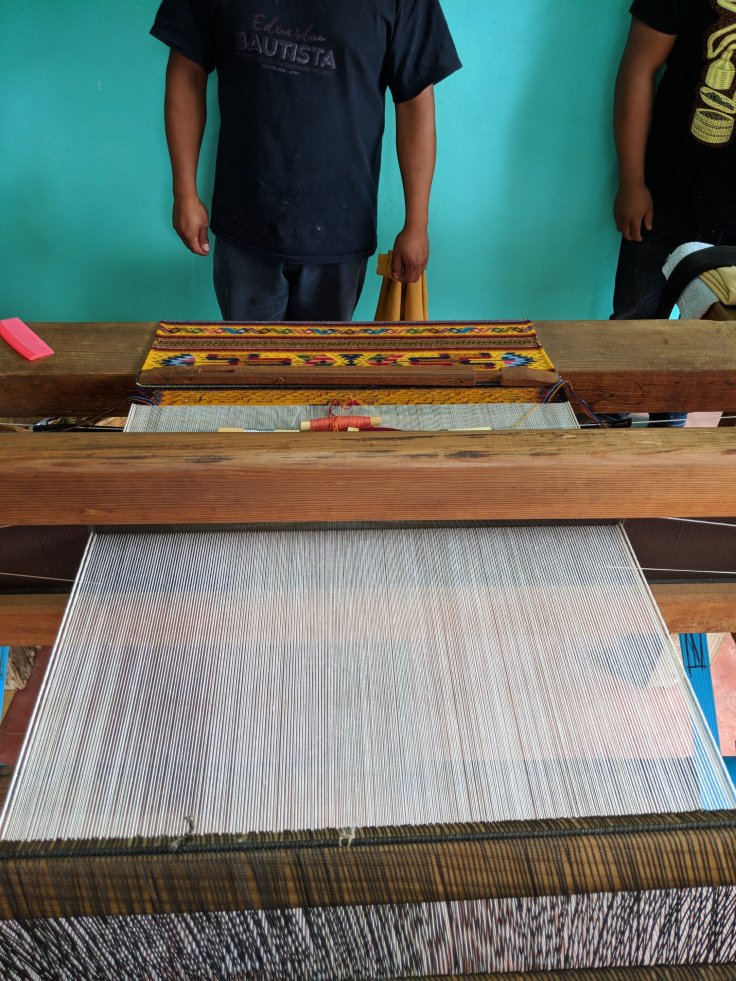 Our final stop was at a place where they make Mezcal. Mezcal is made from the root of various cactus plants. There was another massive thunderstorm as we arrived so we skipped the tour and went straight to the sampling. We started with four on the table but by the time we finished, there were twelve bottles in the table! The taste of them all is pretty strong and not that pleasant! The bus journey home seemed a lot quicker though!