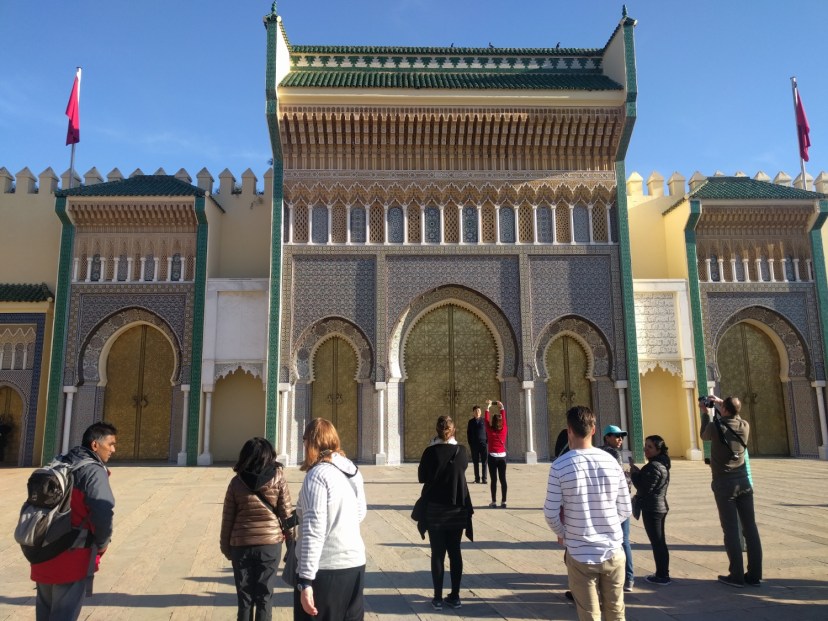 After breakfast we left the hotel at 9am and were taken by mini bus to the ‘new’ city. It seems we’re staying in the ‘Nouvelle’ city, built by the French in the early 20th century. The new city dress to the 14th century!

The gates are extremely ornate and all hand produced in pottery and bronze.

Next we walked alongside the walls issue which is the Jewish quarter. The street was busy with locals going about their business. We saw another impressive gate which takes you into the new city and had storks nesting on top of the tower.

The bus picked us up and took us to a viewpoint above the city. Or local guide was keen to tell us that Fez is considered to be the oldest city in the world which has not been destroyed and rebuilt. The are some 10,000 alleyways, within the old city , all of which are too narrow for cars.

Next we visited a pottery where they make and decorate pots and also intricate mosaics.

The rest of the day was spent wandering through the narrow streets of the old city, much of which dates back to the 9th century.

We saw the university, also considered the oldest on the world, apparently.

Before lunch we stopped at the famous tannery, also contained within the city walls. The smell wasn’t as bad as we were told but I suspect that it was much stronger where the men were dying the leather by hand.

After some of the test of the group had purchased from the leather shop we went for lunch in a riad. The lunch was delicious, but like much of the city the room temperature was chilly!

Next stop was a metal work shop where we were shown teapots and plates, all intricately carved in silver and bronze.

We visited an old madrassa, the school where children used to go to learn about Islam. The walls were decorated with intricately carved older and more mosaics.

Our final stop was at a weaving shop where they make items using silk which is produced from aloe Vera plants. Again the work is not very mechanised, although they do use hand looms.

We headed back through the alleys and finally excited the narrow streets of the old town. We caught out minibus back to the hotel and spent the evening chatting with our fellow travellers over a few beers purchased from the off licence opposite.