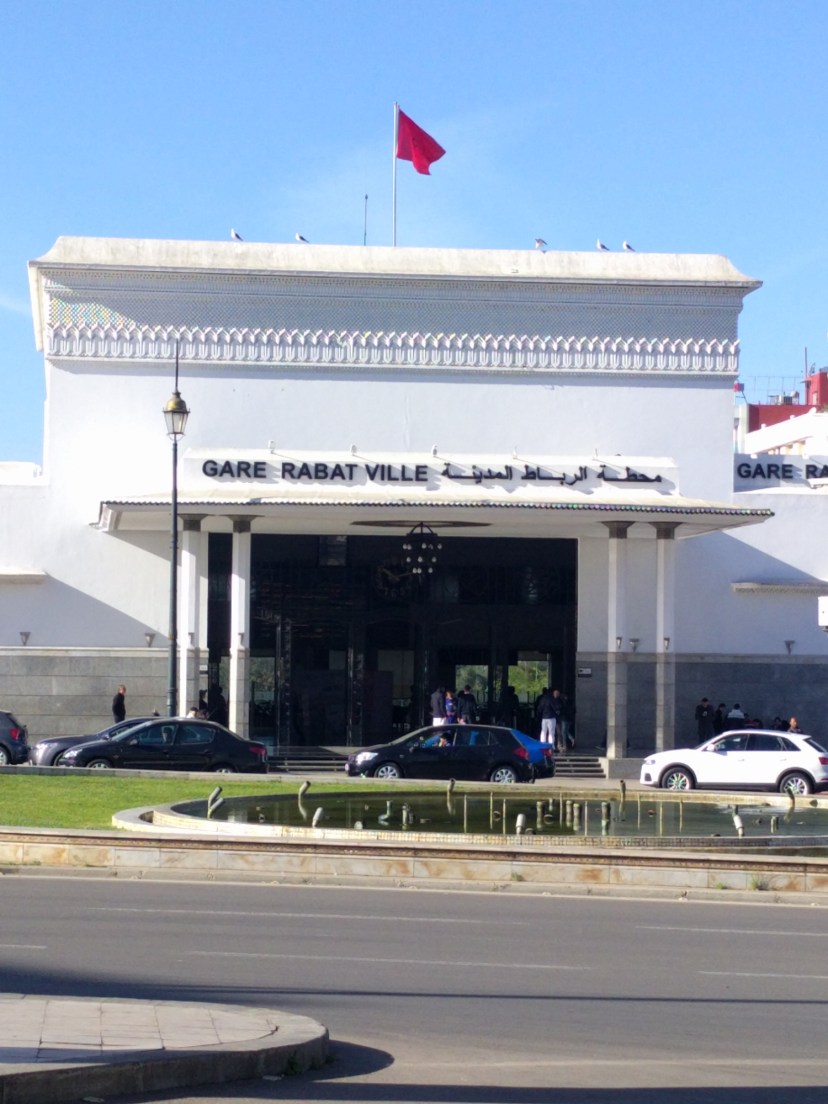 We met for a simple breakfast of pastries, bread, eggs and coffee at 7am and then left the hotel to get a taxi to the station.

It was pretty chilly outside and we caught a train to Rabat which took just about about hour.

We walked thru the city, passed the cathedral and then within the Andalusian wall into a souk which was very pretty and clean!

We eventually arrived at the Kasbah, a fortified castle sitting at the mouth of the river. The Kasbah was very pretty, had a lovely garden area and we also had a mint tea with local cake overlooking deep blue water.

Next stop was a walk along the river to a 12th century tower which never got finished because the king died.

Opposite the tower is the mausoleum of king Mohammed V, a very pretty and ornate building.

By now we only had 10 minutes to make the 20 minute walk back to the cafe where we were having lunch. The weather had warmed up and we were pretty hot by the time we got back. The small group of us were not last though and it seems that Mohammed had given a sensible reserve of time. We had an unmemorable lunch of omelette (cold) and French fries before heading back to the station for our next journey, a 2.5 hour train ride to Moulay Idriss, burial place of the same, a very religious city in Morocco.

The train took us back inland and through lush green landscapes to the city of Meknes. From there it was a 30 minute taxi ride to Moulay Idriss. We checked into our homestay for the evening which was up narrow side streets and, like many Moroccan houses has a very bland exterior but once u to the door it opens out into a home based assertions a central courtyard.

After a welcome cup of Moroccan whiskey (mint tea) we went for a walking tour of the town.
Until relatively recently the city was closed to non Muslims, and visitors still are not allowed into the mausoleum which is in the grand mosque.

Our tour included an amazing sunset high above the town overlooking the mosque.

We walked back down to the bustling main square where there we loads of stalls all along similar stuff – scarves, slippers and jewellry.

It is definitely much cooler here as we’re higher than on the coast.
We returned to our hotel and allocated our rooms. Ours is on the fourth floor rooftop and it’s just as well that the is a heater as the temperature dropped significantly after dark.

Dinner was prepared by the owners’ wife and we were shown how she makes cous cous before being served a warm salad, soup and then chicken cous cous with meatball koftas- all very tasty! No beers tonight as the town dues not serve alcohol due to its religious status!