Up for breakfast at 8 after a decent night’s sleep… Maybe I’m getting used to the hard beds!

We left the hotel at 9 in our bus. The same bus as yesterday but fortunately a different driver called Tenzing.  We also had to pick up a ‘local’ guide and she is called Karma. The bus, Tenzing and Karma will accompany us all the way to the border with Nepal. On current performance the driver is far better and seems to be able to find the gears and use the breaks effectively! The bus is a bit more crowded today as we also have all our main bags with us… taking up the whole of the backseat.  Ed and I seem to have ended up with the two seats with the last leg room, despite being the tallest!  At least it’s only 5 hour journey today and we’ll dedicatedly see if we can swap tomorrow for the 10 hour journey.

First bit of the day saw us using Tibet’s first freeway and after a long tunnel we emerged into a fantastic landscape and crossed the river that eventually becomes the Brahmaputra in India. There are snowcapped mountains rising from all sides of the road and the scenery is simply stunning.  We stopped for a picture break at a layby with a large pagoda raised above the parking area and took some great shots.

We stopped once more before arriving at Samye at a pass 3850m high. There were prayer flags across the road and the views were spectacular. It is just a shame that there was so much litter around. Kando has said it is because the rural people haven’t yet been educated that dropping litter is not good! 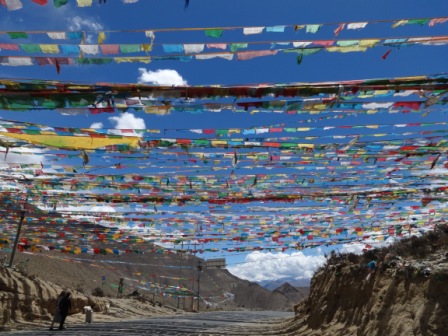 We arrived in Samye at just before 2pm and after taking our luggage to our rooms headed to a local restaurant for lunch. A quick check of the room before leaving revealed a softer bed!  The restaurant didn’t look promising, but the her was cold and the good tasty.

After lunch we visited the monastery, first built in the 7th century. It is one of only two monasteries designed in this fashion, the other being in Bihar, India. The monastery is considered one of the holiest in Tibet and has three stories. The lower assembly room is Tibetan, the second level Chinese and the third libel Indian. The third level is me as it was destroyed during the cultural revolution.  All levels contained numerous statues and bhuddas.  We will visit again in the morning to hear the monks chanting.

We returned to the hotel and donned our walking shoes to climb the 300m to the top of the sacred Hepo Ri.  There were excellent views of the monastery complex from here. lt was here that the local spirits were subdued and coveted to Buddhism. They are now the protectors of Buddhism.  It is also where one of the statues in the monastery ’emerged’ and was carried down to sit in the assembly room. 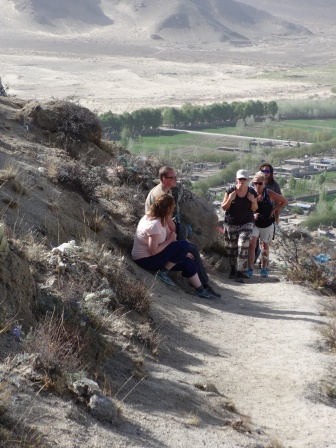 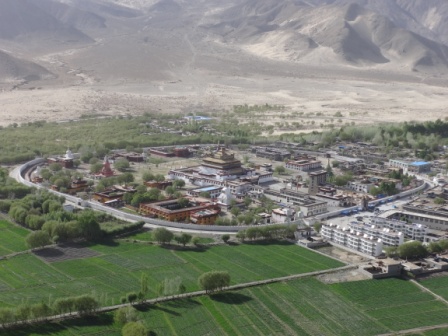 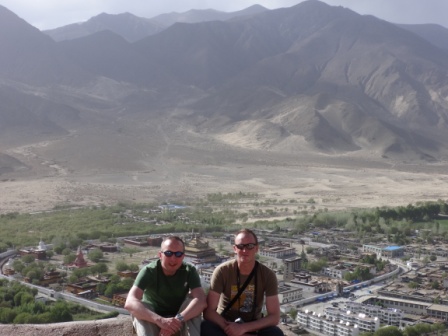 We headed out for food to the same page as lunchtime. One again the food was excellent.  However, the evening was topped off by a surprise birthday cake and celebration for Ed, which has been organised by our guide who ordered a cake (yes those are real tomatoes on top if the cake) in Lhasa and refused to let me pay.  He was presented with three white scarfs, one from the your leader, one from the local guide and one from the driver. A lovely end to the evening.